Skip to navigation Skip to main content
‹ All Venues

Book through The Venue Booker for the best rates 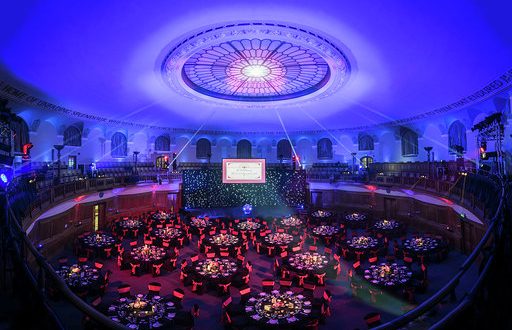 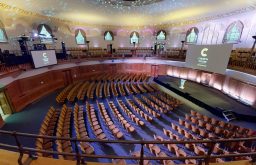 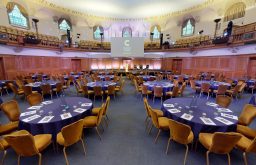 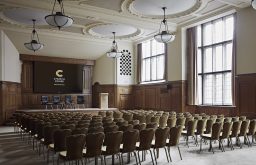 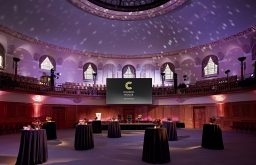 Assembly Hall – Built in 1939, the stunning Grade II Assembly Hall was designed by world-renowned architect Sir Herbert Baker. The polished English oak panelling and emblems sit beneath the room’s architectural focal point – a striking 30-foot glass dome. The Assembly Hall is massively versatile with its large 519 square metres and 8 entrances, it regularly hosts graduation ceremonies, awards dinners, AGMs and special events such as fashion shows, product launches and high-profile lectures.
Hoare Memorial Hall – hosted the the House of Commons for a period during the Second World War and where Winston Churchill made some of his most historic speeches. The elegant oak-panelling, Art Deco Chandeliers, built-in stage and gallery gives the room a strong and stately personality.
Harvey Goodwin Suite – Modern and spacious and equipped with all the latest facilities. Linked with a private staircase to the Robert Runcie Room, which can be used as a breakout room. Offers easy access as it’s located on the ground floor near the Great Smith Street entrance.
Bishop Partridge Hall – One of the most popular rooms with its atmospheric blend of elegant stucco ceiling, traditional oak panelling and a stunning stone balcony with views of Dean’s Yard and Westminster Abbey.
Convocation Hall – the room housed the House of Lords for periods during the Second World War. A low stage at one end of the room is framed by classically inspired arch details, with a private balcony at the opposite end.
The Council Room – self-contained meeting room with its own lobby.
The Abbey, Westminster and Sir Herbert Baker Rooms – three rooms located next to each other on the ground floor, ideal for meetings, workshops and seminars.
The Canterbury, York and College Rooms – small meeting rooms for one-to-one gatherings and interviews.
The charter and the Jubilee Rooms – located on the first floor, often used as breakout rooms and as and organiser’s office.
The Coggan, Ramsey and Temple Rooms – three rooms located next to each other on the lower ground floor, often used together for breakout sessions or in conjunction with the larger Robert Runcie Room on the same floor.

Church House Westminster holds a Silver Award from Green Tourism in recognition of its commitment to operate in a sustainable way. It has also recently been awarded an ECOSmart Gold Venue Award.
Full details on our website – https://www.churchhouseconf.co.uk/sustainability

Church House Westminster seeks to make all reasonable efforts to comply with the provisions of the Equality Act 2010.
Full details on our website – https://www.churchhouseconf.co.uk/accessibility

Corporation of the Church House

Send us your enquiry

It only takes a couple of minutes to send us your brief online and we will get to work.

Why The Venue Booker

Thank you so much Jenny, you are fantastic and I am grateful for your help.

The Venue Booker provided us with a fantastic selection of venues to view for the two events we enquired about – each of these met our brief, several offered something really special and most of them came with discounted rates that we would not have been able to achieve on our own. The service is free of charge and Jenny is friendly and helpful. We will definitely use them again.

The event went very well thank you - the venue was superb and fitted our requirements exactly. I wholeheartedly recommend it. I will definitely be in touch when I need help finding a venue for our next event.

Morning Jenny! Everything went very well thank you and the venue was a huge success!! Thank you so much again for finding such a gem! I am still getting lovely emails now so a big thank you for all your support Jenny!! I have been singing your praises all week!

Easy to work with and cost-effective. In 2014 The Venue Booker was asked to identify a suitable, new venue for Chambers’ prestigious Medical Law Lecture. Jenny not only met the brief by finding the right venue but she also secured it on favourable terms.